Within the framework of the conference, the AMS-Workshop will be held: “Advances in Materials Sciences  - 2020”.

We invite scientists and specialists from Russian and foreign universities, academic institutes, enterprises, design and research centers to take part in the Conference.

The purpose of the Conference is to share the experience of leading experts in the application of advanced science-intensive and information technologies in the aerospace industry, mechanical engineering and automation of technological processes and production.

The Proceedings of the II Conference MIST: Aerospace-2019 were published in IOP Conference Series: Materials Science and Engineering (volume 734), indexed in Scopus.

The Proceedings of the I Intenational workshop MIST Aerospace - 2018 were published in IOP Conference Series: Materials Science and Engineering (Volume 450) and indexed in Scopus and Web of Science.

The work of the Conference is planned in the following directions:

Within the framework of the conference, the AMS-Workshop will be held: “Advances in Materials Sciences  - 2020”.

The workshop is intended for a wide range of scientists and specialists of research institutes, design organizations, industrial enterprises and educational institutions interested in materials science.

Within the framework of this workshop, theoretical and practical results of research and development on the following issues will be highlighted:

The proceedings of the workshop are planned to be sent to Key Engineering Materials for further publishing. 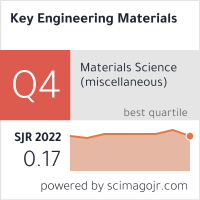 Information about the conference

Selected papers are planned to be sent to Key Engineering Materials (indexed in Scopus Q3 / WoS) for publishing. The guidelines will appear soon.

All authors submitting the papers for publication in IOP conference series are assumed to accept the terms of: IOP Proceedings Publication Licence.

All papers will come through the basic review which is an initial technical criteria check (paper field, structure of submission, adherence to the submission instructions, English language usage and a check for the similarity rate). Any papers out of the scope or containing plagiarism, including self-plagiarism, are rejected.

We use a double-blind system for peer review; both reviewers' and authors' identities remain anonymous. The submitted papers will be reviewed by at least two experts: one editorial staff member as well as one to three external reviewers. The review process may take about 10 days. The reviews will be conducted to the professional and scientific standards

Notification of the Result of Review

For non-resident participants, graduate students and young scientists, participation with an online presentation is available (E-presentation - from 3 to 5 slides - are issued in free form in pdf / ppt format, the template can be downloaded on the conference website).

Digital presentations of participants will be exhibited on the conference website in the Conference Materials section, and will be broadcast during the conference on multimedia screens in the lobby and in the hall non-stop.

We will provide the participants with visa support documents (an official letter of invitation).

We will be glad to help with accommodation in cozy and hospitable hotels of Krasnoyarsk at special prices to all participants during the conference! by priory arrangement. Accommodation and travel expenses are paid by sending organizations.

Hotels near the Conference venue: Lights of Yenisey, Ermak, Krasnoyarsk

The public institution "Krasnoyarsk Regional Science and Technology City Hall of the Russian Union of Scientific and Engineering Public Associations" is a non-profit organization whose main goal is the development of scientific and engineering activities; additional education of children and adults, advanced training and professional retraining of specialists in various sectors of the economy and industry, medium and small business; creating favorable conditions for the exchange of scientific and technical ideas and achievements; promotion of modern achievements of science and technology; development of social entrepreneurship.

Krasnoyarsk Science and Technology City Hall has always been the centre of scientific, technical and educational events of the city. Every year more than 20,000 people visit it to participate in all kinds of events like conferences, workshops, seminars, exhibitions, lectures etc.

There are more than 30 resident companies in the building. The building has lecture halls, a big concert hall and 3 comfortable classrooms.

We are situated in Krasnoyarsk - the administrative center of Krasnoyarsk Krai, Russia. It is the third-largest city in Siberia after Novosibirsk and Omsk, with a population of more than 1,000,000 people.

The easternmost city of Russia with a population of at least million, located on the banks of the Yenisei River, and the capital of Krasnoyarsk Krai (district). The area is over 2 million square kilometers. Krasnoyarsk is a major industrial, cultural, economic and educational center.

The city is located 4,065 kilometers from Moscow along the Trans-Siberian railway. It takes about 2 days and 10 hours to get there from Moscow by train and about 4.5 hours by plane.

Krasnoyarsk is the center of the vast Krasnoyarsk region, it is the second biggest city in Siberia after Novosibirsk and a powerful industrial center.